CHECK IT, FOLKS: I’ll be supporting Katelan Foisy at her book release party for Blood & Pudding. Her artwork is amazing and there are going to be a boatload of wildly interesting people doing readings of their work also including John S. Hall, Mike Lala, and Eric Nelson. And me.

Check out Katelan’s beautiful website and details of the event, including the totally cool event poster HERE. 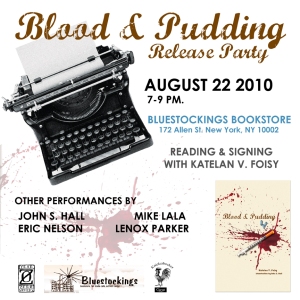 Dude, what the fuck does that mean?

That’s what I keep thinking when I hear people drop that line. “Oh, so and so is just scared of success, so they self-jeopardize, yadda yadda.”

I don’t understand what that means.

Or at least I didn’t think I understood what that meant until a few minutes ago.

The Yankee game is on a rain delay so I thought I would sketch out a plan of action to tackle the various projects I have jumbling around in my head. Prioritize, make a timeline, create an outline, do some research, that kind of thing. And then I realized that I have a novel I am about to release any minute now.

What am I doing working on other projects — juggling several of them, in fact — when I have a life-sucking day job, two toddlers, a commute from hell, and Back(stabbed) In Brooklyn to release? Since my last book’s promotion was brought to a screeching halt due to circumstances beyond my control, I owe it to myself to push Back(stabbed). So then I thought, am I that scattered, or am I really just trying to escape what could be a disappointing, anticlimactic release? Or is it the other thing — that fear of success thing?

For those of you who know what my last book was about (the young me), you’ll recall that it was a series of goals that I set which I met, and became disoriented after having met the goal. It’s kind of disappointing when you set out to reach what you tell yourself is a lofty expectation, and then you get there and it’s not so fabulous.

So perhaps it’s not a fear of “success,” in its immeasurable form, but a fear of continued disillusionment. Or, worse, (and this is where you say, babes, go see a shrink), an inability to feel satisfied not just with my own work but with its acceptance in the world.

So what does this all have to do with writing? Because it is a tremendous emotional and personal investment in our work and while we rely on external validation to a certain extent, much of how we feel about our work is measured on an internal scale. I write because I like to tell stories. I feel personal satisfaction once I’ve read the story I’ve written. I am proud of a lot of the stories I’ve written. But I cannot help but to put my work on a larger scale with the hopes that I’ll find gold at the end of the rainbow. Part of that desperation is due to the fact that the gold is simply unattainable.  It is like asking to live in bliss, to be able to support my family and writing.

Well, girlie, this life doesn’t work that way (for me, at least). My fear of success isn’t the problem so much as my expectations to win over fans and readers, adulation, demand, and my overwhelming desire to have the freedom to start any project I want. In order to really hit the next level as I want, I have to take some serious risks and just focus. I realize that I probably am not willing to risk what I have now (lame) in order to pursue what I really want. I did that. 29 times. And failed.

Projects I would like to get off the ground:

Can I do it all? Check back to measure my progress. Nudge me, will ya? Thanks.